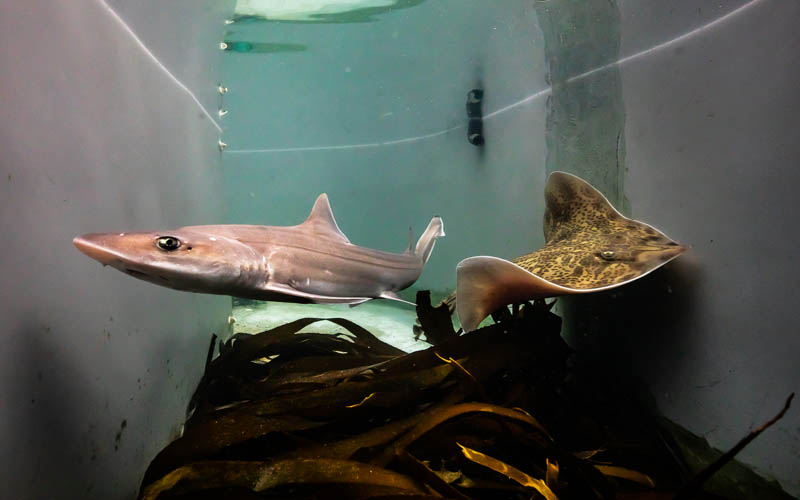 
It is always rather frightening to begin a new journey in a new continent with new people. You could imagine the worry on my mother’s face when I proposed a shark conservation and ecology internship in South Africa after reviewing internship opportunities. South Africa is a little more than a stone’s throw from Canada and we both knew it was going to be more than a week-long stay.

Fast forward to 2 weeks into my 8-week internship with the phenomenal South African Shark Conservancy, I knew that leaving home to pursue my passions in marine biology was one of the best decisions I have ever made. This was an opportunity to focus on shark biology, improve my field and lab techniques as well as to meet people from around the world and explore a new country.

As a marine biologist, travelling was something that I knew would be a part of my future career. This is why I jumped at the opportunity to fly off again and join this environmental internship after being home from university for just a month.

I had just completed my first year at Dalhousie University in their Integrated Science Program and had now declared majors in marine biology and oceanography. The year had been more than eventful due to completing my first scientific research project which sought to quantify the effect of limiting public access to elasmobranchs, sharks and rays, abundance and species diversity in the Bahamas.

Marine ecology is a vital aspect of marine conservation and understanding these underwater ecosystems. Studying sharks and rays was something I was hoping to do during the internship, so this seemed like the best place to dive a little deeper.

The first week flew past and I would not be exaggerating to say that I have never learned so much. We began with introductions to the amazing projects that are run at the conservancy, including shark tag and release, estuary monitoring, baited remote underwater video sampling, public outreach, and much more. Cultivating the reasoning behind the work that we do as marine biologists and conservationists is essential to carry out effective studies and work.

This introduction was followed by a large flow of knowledge and information including shark anatomy, physiology, ecology and conservation. Being able to understand adaptations utilized by various shark species was the interesting section of the biology and ecology presentation, finally understanding the green eyes that some deep-water sharks showcase.

The Tapetum Lucidum is an extra layer behind the retina that reflects light back through, allowing an image to increase in its quality in low light conditions. I found this of major interest, as I am drawn to deep-water elasmobranchs and research concerning their population dynamics and status is relatively sparse.

Putting my newly developed and expanded knowledge to use, I was able to learn field and lab skills, including husbandry, tagging, finclip sampling and handling. I also served as lab manager for the first week, which to say the least was a little daunting when just learning the ropes. I enjoy leadership roles and keeping organized is a must for me, so to be pushed out of my comfort zone was the perfect way for me to get settled in.


The second week also proved eventful as the conservancy had been reopened to the public after renovations. Public speaking and presenting are some of my favourite parts about marine science, other than the sharks, and I therefore jumped at the opportunity to give the first public tour.

After reviewing my information and preparing some informative and engaging props, ex. sevengill shark jaws and spearnose skate egg case, I felt confident in my ability to further the conservancy’s outreach goals and assist in any way I could. The presentation and lab tour went swimmingly and currently, myself and the other interns are formatting a new presentation for the tours.


In terms of field work, the most enjoyable day was the BRUV deployment. BRUVs or baited remote underwater video are used to record the abundance and diversity of different organisms in the ocean. They are deployed for an hour and six minutes, 1 hour of video plus 6 minutes to allow for the bait plume to disperse. These BRUVs are used to detect differences in abundance and diversity of elasmobranchs in different management regimes, collecting data on protected areas versus seasonally protected areas versus non-protected areas.

Other than public tours and BRUV surveys, we also got out first chance to swim in the local waters. I descended into the freezing cold water wearing an insulated wetsuit, hood, boots and gloves and despite the cold, I was surprised to find an insane variety of marine species including pyjama and dark shysharks inhabiting the local waters just outside the conservancy. Cape Town is blessed with diverse shark populations.

Rock lobster, hagfish and other kelp forest species also kept me in awe and I managed to catch a shyshark for the lab tanks. I am so excited to go for another snorkel and even more excited to start my next two weeks here at the South African Shark Conservancy on this environmental internship experience. 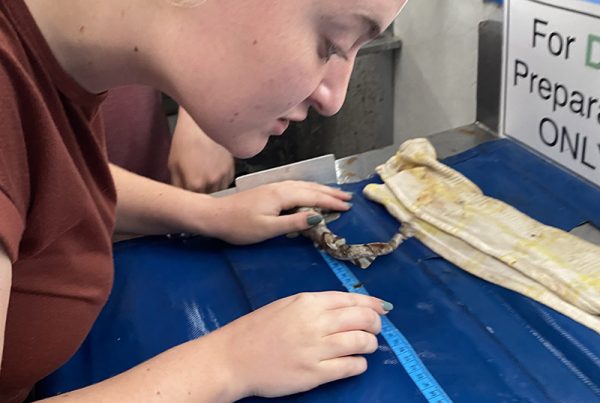 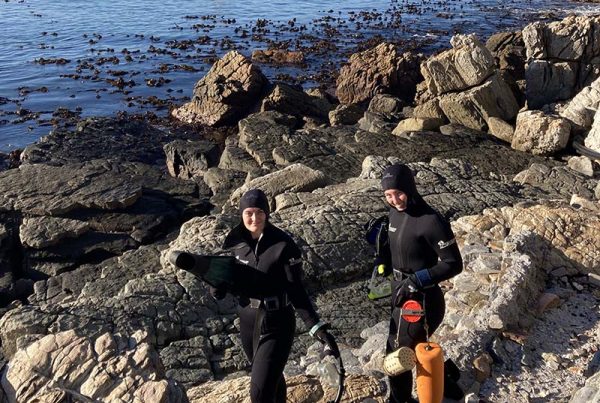 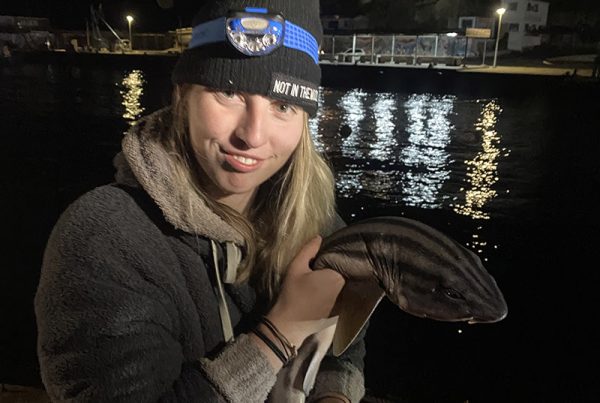